The Aftermath in the US

Blast From the Past: Greg Harlin/Wood Ronsaville Harlin
News article from The Republican Farmer, 1816. 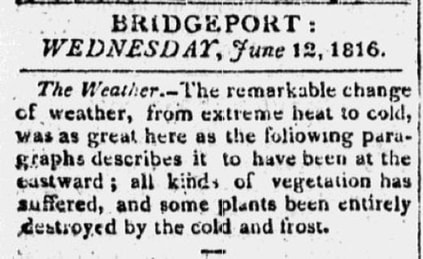 Not only was Europe ravaged by the fallout of the eruption - America was suffering too. Much like Europe, the United States succumbed to crop failure and famine. Nearly a year after the eruption, in May of 1816, states such as Virginia began to experience the seasons turn backwards. In the season of summer, one would expect it to be warm and getting hotter as each day passes. Instead, Northeastern Americans woke up to a bitter frost each morning. Even in the month of July, bodies of water were freezing over and snowfall was occurring. Due to this change in weather, the most prominent time for farmers became a time of failed crops instead. Prices were on the rise for produce and the supply couldn’t meet the demand.

Due to the failure to produce crops and the changing climate of New England, farmers and other American citizens tried to change their luck by migrating over the Ohio River. West of the Ohio River became so densely populated that the states of Indiana and Illinois were eventually established. It is also reported that up to 15,000 people may have left the state of Vermont just to migrate west. This was in an attempt at seeking a better climate further inland, as it was stated that in Philadelphia “every green herb was killed and vegetables of every description very much injured.”

From the lack of any real substance, Americans that chose to remain in the Northeast resorted to eating other things that weren’t exactly ideal. Citizens chose to kill raccoons, pigeons, and even porcupines for food. Eating these animals more than likely led to famine. An aftereffect that was causing more damage than any other was typhus, and this was said to be one of the worst outbreaks in American history. Food riots ensued and some farmers found themselves out of work, resulting in a lot of beggars that wandered the streets. The eruption of Tambora put the globe in an economic and dangerous bind.